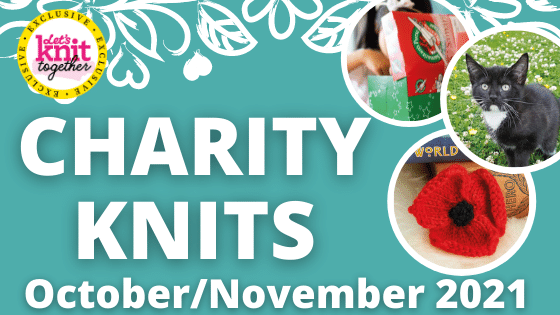 Welcome to another month of our charity highlights, where we round up stories from charities that need your help!

This month, we are looking at Operation Christmas Child, Yorkshire Cat Rescue, and the Royal British Legion and highlighting how you as knitters can help to raise money! We know that you are a very giving and charitable bunch, so scroll down to find out how you can help. If you are a member of the Let’s Knit Together private Facebook group, don’t forget to let us know what you’ve been making for charity so we can add your pictures and comments to the blog.

Give a Gift
If you love creating little toys but are running out of people to give them to, look no further. Operation Christmas Child, run by an Evangelical Christian charity, sends donated shoeboxes filled with toys, school supplies and more to children around the world who have been affected by war, poverty and natural disaster to spread joy and love. Cuddly toys are perfect gifts, providing children with a companion to adore straight away. Visit samaritans-purse.org.uk and click on Operation Christmas Child for more information and to find your nearest drop-off location.

Get Knitty for Kitties
Yorkshire Cat Rescue is a charity that aims to save the lives of abandoned and unwanted kittens and cats in Yorkshire and beyond. At their centre in Keighley, our feline friends are provided with food, veterinary care, shelter and love until they find a new forever home. The charity has lots of fundraising ideas on its website, or why not follow Let’s Knit reader Debbie Dornan’s lead, by knitting fun cat toys to sell on the charity’s behalf. Visit yorkshirecatrescue.org for more ideas, and join Fundraising for Yorkshire Cat Rescue on Facebook to keep in the loop.

Poppy Power
How To Knit a Poppy Knitting Pattern 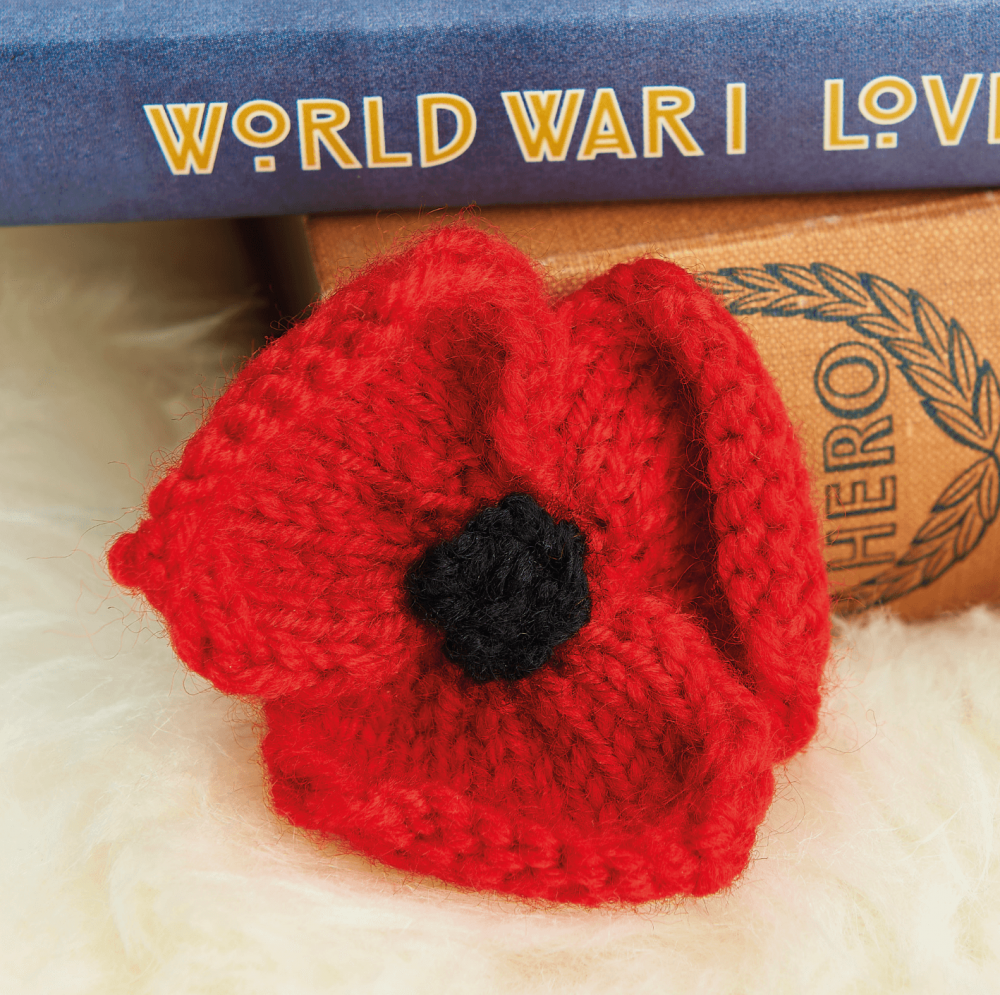 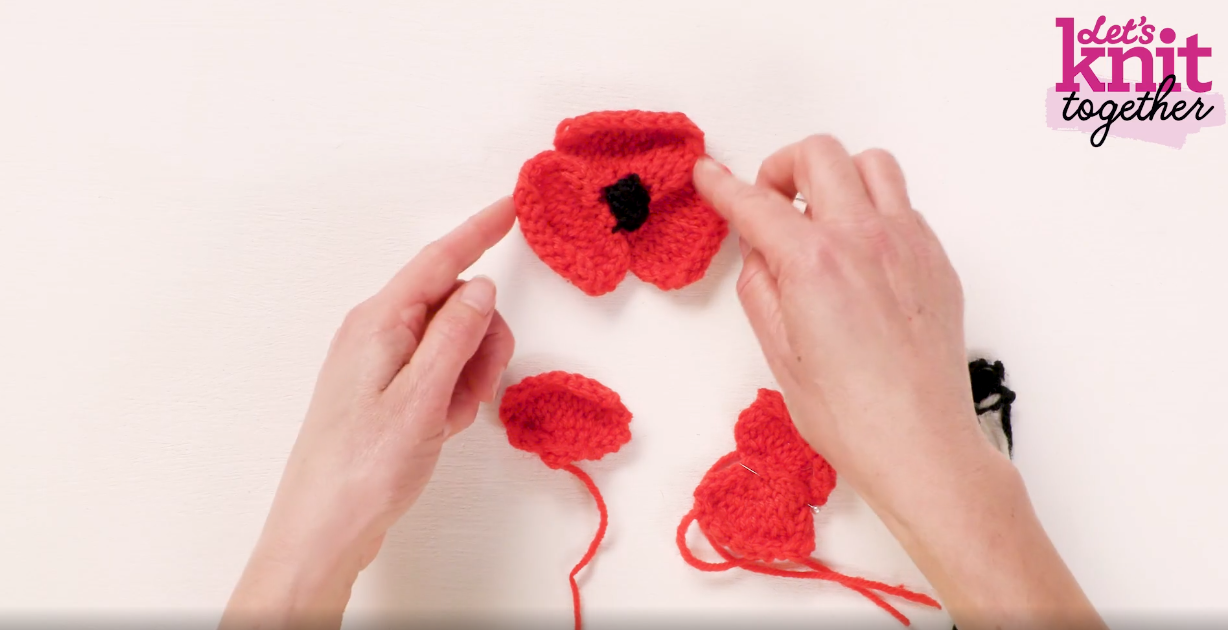 Founded in May of 1921, this year the Royal British Legion is celebrating 100 years of supporting the armed forces community, with the poppy as its enduring symbol of remembrance

This humble flower was first mentioned in the 1915 poem ‘In Flanders Fields’ penned by Canadian Lieutenant- Colonel John McCrae. After losing a fellow soldier, he’d been moved by the striking sight of thousands of red Flanders poppies carpeting the devastated battlefields of the Western Front. This poem in turn inspired Moina Michael in America who campaigned for it to be adopted as a sign of remembrance, with others around the world, including Frenchwoman Anna Guérin. Anna planned to sell poppies in London, where she met the founder of the RBL, Earl Haig, and persuaded him to adopt the flower for its emblem. Nine million red poppies were ordered and sold out on 11 November of that year. These days the number is around 40 million, all raising money for the Royal British Legion to help support service personnel and their families, cutting across political and religious beliefs.

Unlike the paper versions sold by volunteers today, the very first red poppies were made from fabric, and the leaf was not added until the 1960s, when popular corsages featured a sprig of greenery. It is hard to know when the first knitted or crocheted version made its appearance, but surely it can’t have been long for a charitable yarn enthusiast to come up with a pattern to be used to sell for this good cause!

While we are most familiar with the red version for the Royal British Legion (visit britishlegion.org.uk), poppies of other shades have been adopted by other organisations. The Peace Pledge Union (see ppu.org.uk) is a UK pacifism organisation established in 1934 that promotes wearing a white poppy in remembrance for all victims of war, a commitment to peace and a challenge to attempts to glamorise or celebrate war. A campaign for black poppies to highlight the contributions by Black, Asian and Caribbean communities was also started by Selena Carty in 2010, while still supporting the ideal of the red poppy. Purple has often been adopted in recognition of animals, especially horses, donkeys and dogs, who have lost their lives through war, and is currently an icon of The Warhorse Memorial, which raises funds for animal charities in need.

These iconic flowers look good in any yarn, and often tension is unimportant as long as your knitted fabric is sturdy enough to hold its shape. A small poppy is unlikely to take more than a few grams and is a great way to use up odd ball ends. Why not try a fuzzy yarn such as a mohair blend for soft petals and a delicate halo, or an eye-catching black bobble centre? A sparkle yarn would certainly make for an eye-catching flower. For an outside display, synthetic yarns will stand up to the autumn weather without fading or degrading much better than natural fibres, but for a meaningful brooch or bag charm, you may like more of a treat in more luxurious fibres. 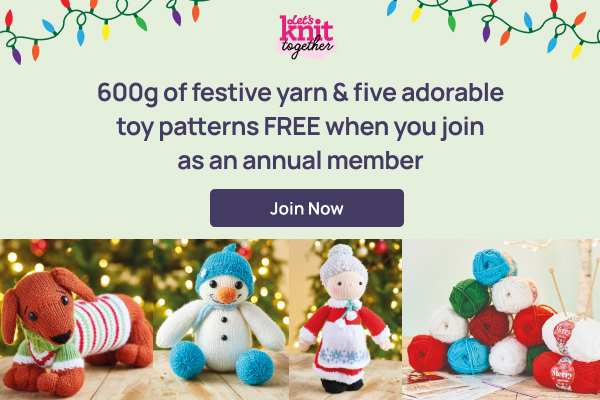