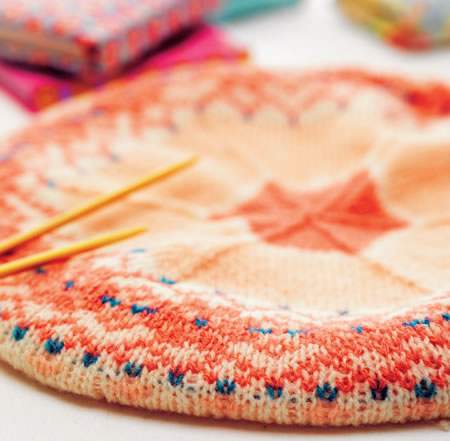 Show off your new Fair Isle skills with Iona, a beautiful beret from Luise Roberts

Iona is a pink and pretty beret that really shows off this great colourwork technique, while the hints of blue throughout the motif add an extra bit of interest. Worked in the round with both stranding and weaving techniques, this project combines all the methods that we've featured in our tutorials over the past two issues. Try working this design by carrying different colours in each hand – find out how to do this on page 44 where we bring you the concluding part of our Fair Isle masterclass.

Change to 3.25mm circular needle
Rnds 39 - 60: work chart in st st (k every rnd), working patt rep 15 times across rnd
Change to 3mm circular needle and yarn B
Rnd 61: k
Secure a marker to the knitted fabric to indicate the column of stitches where the third blue stitch of rnd 60 lies, then every fifth blue stitch in the rnd
NOTE: centre the double decs above these markers in the following rnds. The second slip stitch of the sl2tog, k1, psso, marks the centre of the dec and should be above the stitch marker
Rnd 62: still using yarn B, * k to next marker, sl2tog, k1, psso, rep from * to last marker, k to end of rnd.
168 sts
Rnd 63: k
Rnds 64 - 75: rep last two rnds six more times. 96 sts
Rnd 76: as Rnd 62. 84 sts
Break off yarn B, join in yarn A
Rnd 77: k
Rnd 78: as Rnd 62. 72 sts
Break off yarn A, join in yarn D
Rnd 79: k
Rnds 80 - 83: rep Rnds 62 - 63 twice more. 48 sts
Rnds 84 - 86: rep Rnd 62 three more times. 12 sts
Rnd 87: ssk six times.
Six sts
Cut yarn 10cm from last st. Thread onto a tapestry needle, pass needle through the rem stitches, draw tight and fasten off
NOTE: when finishing the last few stitches at the centre of the crown, leave a loop of yarn in front of the first stitch before passing the yarn through the remaining stitches on the needle. Before drawing the yarn tight, pull the loop of yarn to reduce the stitches on the last round

Weave in ends. Block the beret by wrapping a 30cm plate with a hand towel, slipping the beret over the top with the wrong side uppermost. Lightly steam or press through a damp cloth