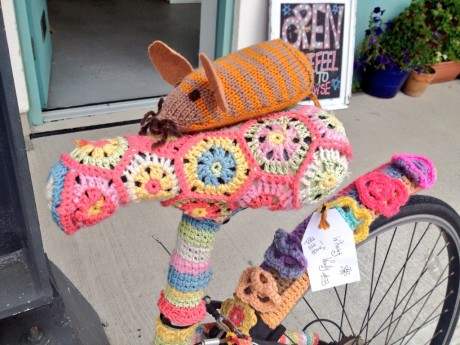 During last year’s Wool Week, Lisa Tricoteuse of The Knitting Tent began a yarnbombing journey called “Where’s Woolly?” which would take her creations all over the world … Now, a year later, it’s finally coming to an end!

From mice to robins, hats to watering cans, Lisa began leaving one yarn bomb a week in various locations around the UK, each with its own handwritten label explaining the project and giving contact details.

“I suggested that they can take a picture of themselves with the yarnbomb and send it in, then take the yarnbomb home,” Lisa explained. “Or they could leave it for someone else to find - or they could set it free again by placing it somewhere else. The participants have done all three of these things so far! Some have taken them to new places and sent in another photograph of the ‘Where’s Woolly?’ on its travels. One woolly hedgehog has been sent on to Perth in Australia to continue its journey there!” 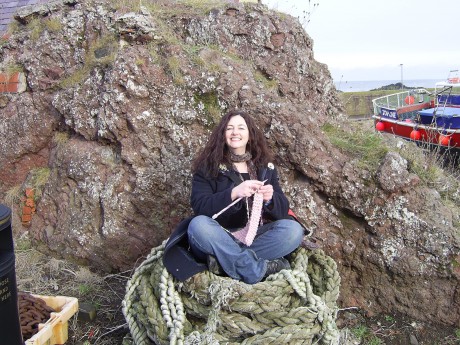 Lisa has completed 52 yarn bombs in just one year

She explained how she went about deciding which project to use next. “I have a large stash of potential yarnbomb materials created during workshops and projects I’ve worked on in the past, so I usually choose something from this. This mean’s that the ‘Where’s Woolly?’ may have been made by me, or someone else, and often has a nice story behind it. For example, the mice that I’ve used were created as part of a knitted landscape project for International Women’s Day several years ago.”

The response from the project was instantly positive. “I only seem to have had good responses luckily! There’s a definite feel-good factor involved. Placing the objects is enjoyable and makes me smile, and I sometimes step away afterwards and observe the response they get. Without doubt the objects placed often cause a smile at the very least, and it’s a nice feeling to know I have played a part in that.” 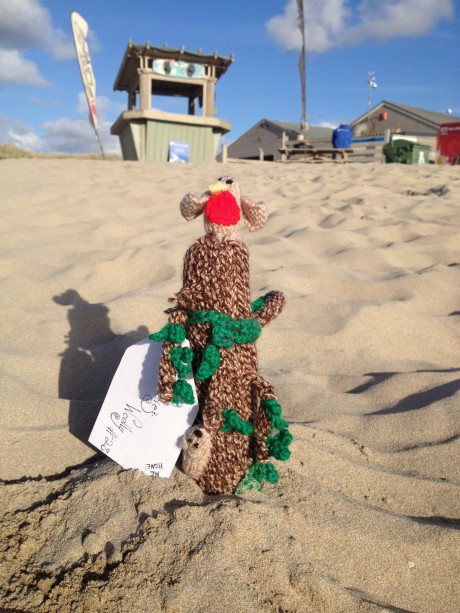 The yarnbombs were found all over the country – from cities to seasides!

“I’m always really pleased to receive a photograph or interaction from a ‘Where’s Woolly?’. It means that people are joining in with my project (so maybe it’s not so daft after all!), and any art project is a success if it causes a reaction – even more so if that is an interaction with the artist or anyone else.”

Lisa explains why she loves yarnbombing with the same enthusiasm that helped to drive her year-long project. “It feels a little bit naughty! It can be a subversive form of protest, it can brighten someone’s day and it’s an opportunity to spread a little bit of woolly love!” 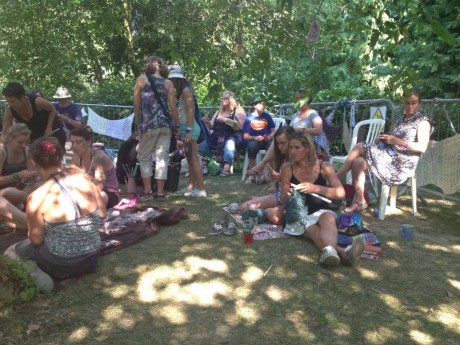 Knitters come together at the Larmer Tree festival 2013

She began The Knitting Tent around six years ago. It is a travelling workshop, consisting of herself and her handmade yurt, as well as a team of knitters and crocheters.  They pop up at festivals and events to provide workshops, drop-in yarnbombing sessions, and tutorials such as ‘knit a flower in an hour’.

“We sometimes yarnbomb as part of the workshop and leave it behind and I also create site specific textile art for festivals & venues. Our favourite festival is Larmer Tree Festival in Dorset; we have people queueing up for workshops, and on a sunny day there we can easily have 50+ people knitting simultaneously!”

She reflects on the last year with a smile – but it’s not over yet. “This is my last week of ‘Where’s Woolly?’ so I’d better get busy thinking of good places for him to go. Number 52 needs to be something special I think! But I’ve decided to carry on with the project, at a slower pace - so watch out for ‘Where’s Woolly? (The Sequel)’.

Find out more about Lisa’s work with The Knitting Hut, and follow the final stages of ‘Where’s Woolly?’ over at The Original Knitting Tent on Facebook.