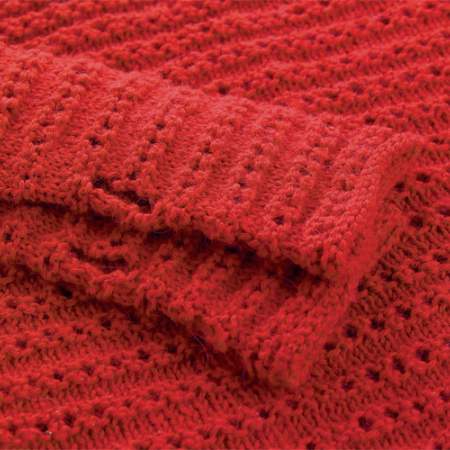 If you're frequently reaching for your purse, phone or bus ticket when you're out and about, then the constant removal of gloves or mittens is more than likely to lead to one going astray by the time you get home. These armwarmers are the perfect solution. They are long and cosy, and leave your fingers free for everyday tasks. The pretty stitch pattern is created using eyelets and regular and reverse stocking stitch worked in horizontal bands. The snuggly cowl features the same design and is ideal for keeping out the winter chills.

Yarn Forward (yfwd) vs Yarn Round Needle (yrn)
Yfwd and yrn are two similar ways of increasing, but which one to use depends on the stitches on either side of the increase. If it is between two k stitches, bring the yarn to the front of the work between the needles, take it over the top of the RH needle and leave it at the back of the work ready to k the next st. This is a yarn forward. A yarn round needle is worked in a similar way but between two p sts. This time the yarn is already at the front so take it over the top of the RH needle then bring it back through between the needles so the yarn is at the front again for the following p stitch.