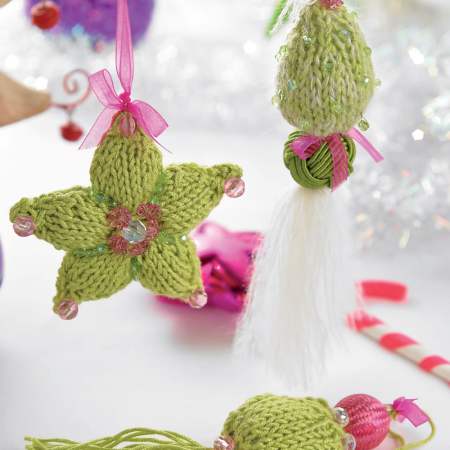 Bring a touch a glamour to your festivities with these brilliant decorations. The lime and pink are a great modern take on traditional Christmas colours and the beads will reflect the sparkle of the lights your tree. Neva is a lovely dangly tassel decoration whilst our Siria star is a more traditional motif but is pretty and feminine, and would make a lovely stocking filler.

Stitch the edges of bobble together, leaving a small gap for stuffing. Stuff and close gap. Stitch tassel to rounded end of bobble. Thread a length of yarn through top of bobble, through a pink woven bead and through a smaller faceted bead; knot at the top of this bead and then make a loop in the remaining yarn. Stitch a row of faceted beads around top and base of bobble and complete with a ribbon bow at the base of hanging loop

Make bobble as for Neva but hold yarns A and B together as you work
Using yarn B, make a tassel
Stitch tassel to a covered bead, then attach to rounded end of bobble. Embellish with small green faceted beads. Make a loop at the top, sewing larger pale pink beads to base of loop.
Tie a ribbon bow at base of bobble

Place slip knots in centre and sew five diamonds together to make a star, joining them from first to eighth row. Make another star from five remaining diamonds. Place WS of stars together and join edges together, leaving an opening on each for stuffing. Stuff and close gap. Sew a large crystal bead in the centre surrounded by pink beads. Stitch a faceted pink bead to each tip and decorate each segment with small green faceted beads. Make a loop and bow from ribbon and stitch to tip of star.