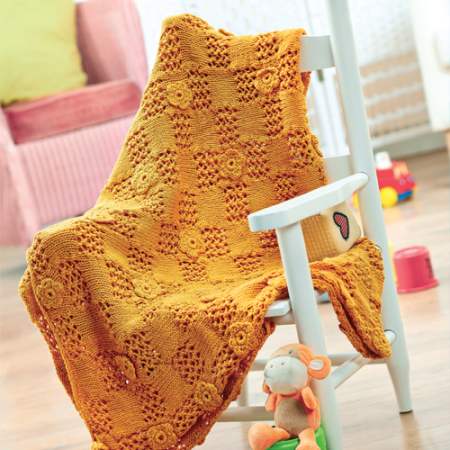 This knitted blanket in Sirdar Snuggly Baby Bamboo is certain to be a hit across nurseries this summer and beyond, with its crochet flower detail and repeated eyelet-square surface. Buy the yarn now from 01653 628896, www.littlelambwool.co.uk

Sew in all loose ends

Sew in all loose ends. Sew the crochet flowers onto the front of the blanket in alternate squares and around the edges

Crochet chains
Whilst the crochet element of Cyrus may seem daunting, the floral flowers are fairly simple to make, even for beginners. To make a chain:
Make a slip knot on the length of the hook.
Pass hook under the yarn (known as yarn over hook), catch yarn in the nook of the hook and pull the yarn through the slip knot and onto the length of the hook. This makes the first chain.
Repeat for as many chains as you need. See illustration for double crochet.