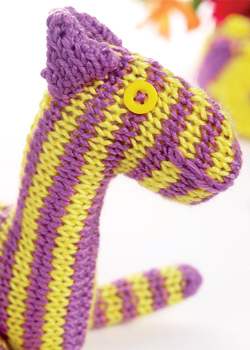 Use your FREE yarn to knit up these exciting projects!

This issue we've given you two balls of bright yellow and purple yarn – because we're nice like that – and LK Designers Laura Cruickshank and Helen Ardley have come up with six tantalising designs just for you. Including a bag, purse, cushion, Fair Isle wristies, scarf and Colin, the following pages are filled with fab quick knits, so what are you waiting for!

Weave in any loose ends. For the body, place WS together and using mattress st, start at bottom edge sew along bottom seam, up side of neck, along and round head, down back of neck and along back leaving back edge open. Stuff the animal and press into shape, sew up the back. Fold each leg in half longways and sew down side seam and along bottom. Stuff the leg and sew up top seam. For the ears, with RS together and using back stitch, sew down both sides of the ear, turn RS out and sew along bottom of ear. Sew legs and ears onto body. Sew eyes and mouth onto face. Take a few ends of each colour and attach to the back of the horse on the top corner to create the tail.