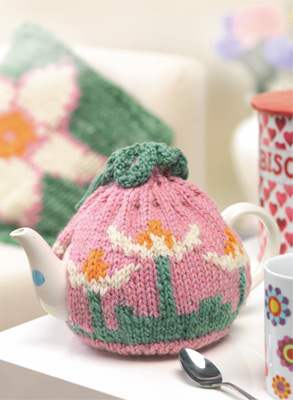 Celebrate the coming of spring with Monica Russel's matching set for the home.

Green and pink are brilliant springtime shades and are the ideal way to lift your spirits after a dreary winter. Homewares are a fantastic opportunity to get to grips with colourwork motifs. This set features two bold floral designs that are worked using intarsia with a small amount of stranding.

NOTE: yarns are held doubled throughout.

To make up
Weave in loose ends and press knitted panels. With RS facing, sew Back and Buttonhole panel to Front inside moss st edging, using mattress st, positioning Buttonhole panel overlapping Back. Sew on three buttons to match buttonholes.

NOTE: use one strand of each yarn.

To make up
Join rib at bottom. From top, join side seams leaving 12cm gap for handle and 10cm gap for spout. Using yarn A held double, thread yarn through eyelets, and tie in a bow to fasten.

Working with multiple strands
For our Flora cushion all yarns are held double. This is easy enough for yarn A as two skeins are needed. Just use one strand from each. For the other yarns, you will need to split the skein in half. When you are winding the skein into a ball, stop halfway, then wind the rest into a second ball. Use one strand from each half when knitting.