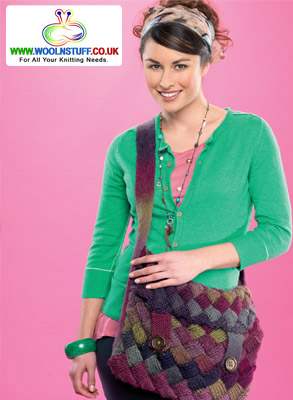 One of the great things about knitting is that you are always coming across new things, like this entrelac bag in self-striping yarn, for example. Even if you've used this technique before it is unlikely you've tried it with a patterned yarn. The length between the colour changes makes King Cole Riot Chunky the perfect choice for this bag. Each coloured block looks like it has been deliberately placed, but really the yarn has done all the work. Online yarn store Wool n Stuff stocks 13 shades of King Cole Riot Chunky. It costs £3.55 per 100g (134m) ball, call 01924 252367 or visit http://www.woolnstuff.co.uk to order yours!

NOTE: this row makes eight right-slanting diamondshaped blocks, with a triangle at each end

Side gusset and handle
(WORKED AS ONE PIECE)

Using 4mm needles cast on 14 sts
? Row 1: * k1, yfwd, sl 1 pwise, yb, rep from * to end of row
? Row 2: * p1, yb, sl 1 pwise, yfwd, rep from * to end of row
? Rep Rows 1 and 2 until strap meas 54cm or length required
Sew side gusset in place (five triangles down one side, one triangle along bottom edge and five triangles up other side. Stitch side gusset in place for second side. Fold over remaining flap

King Cole Riot Chunky is a brilliant affordable yarn with good meterage – a great value option for any chunky knit project. It comprises 30% wool and 70% acrylic and is loosely spun to give it a light and lofty feel. There are nine stylish colourways to choose from.