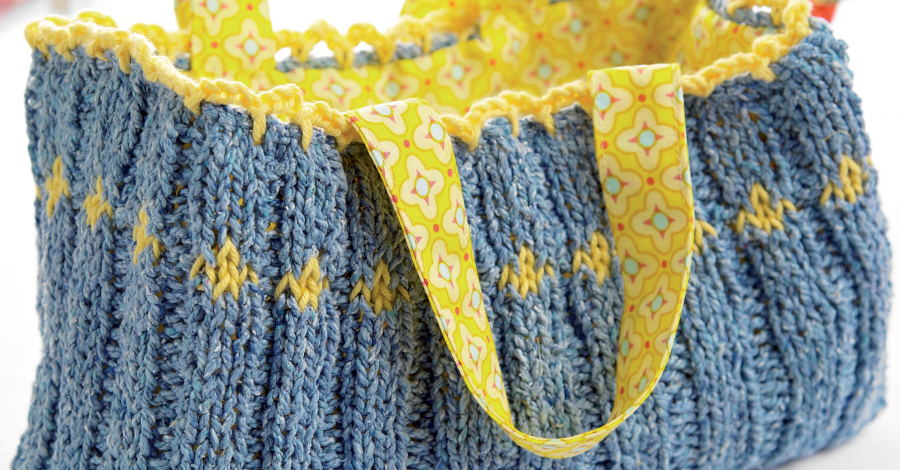 Learn how to knit in the round with double-pointed needles!

Knitting in the round is a great skill to have as it not only enables you to create neat tubes of fabric, but it also means there are fewer seams to sew. For garments and larger items you need circular needles but for smaller projects like socks, hats or sleeves, double-pointed needles are the best option. These often come in sets of five although some patterns only require four needles. The cast-on stitches are distributed over three or four needles then an extra needle is used to knit with. Although it looks baffling with all of those points sticking out everywhere, you are only ever knitting with two needles at a time, just as you would with flat knitting.

Casting on
Even though you are using several needles it is often easier to cast the total required number of stitches onto one needle first. It doesn’t matter which method you use, although if you are working the ribbed cuff of a sock, you will want a stretchier cast on edge.

Step 1
Cast all your stitches onto one needle 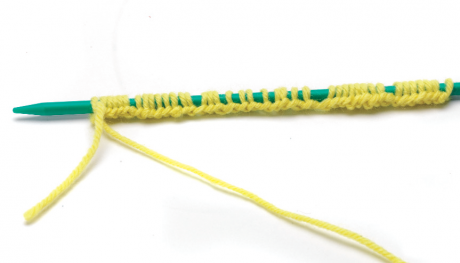 Step 2
Evenly distribute the stitches onto the stated number of needles, in this case four. Starting with the first cast-on stitch, slip a quarter of the stitches onto a new needle. Repeat this until you have the same amount of stitches on each needle. You may want to place a round stitch marker between the last two stitches on the last needle to indicate the beginning of the 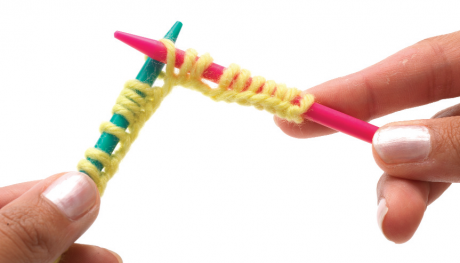 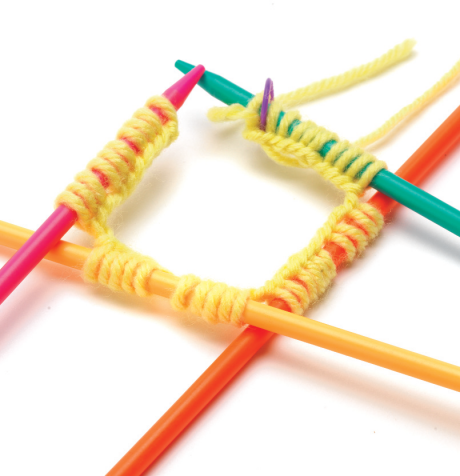 Step 1: Holding needle one (pink) in your left hand, use needle four (green) to slip the first cast-on stitch onto the RH needle. 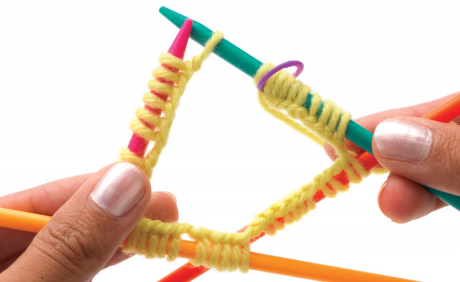 Step 2: Using needle one, lift the last cast-on st on needle four over the slipped stitch and onto the LH needle. You are now ready to knit. 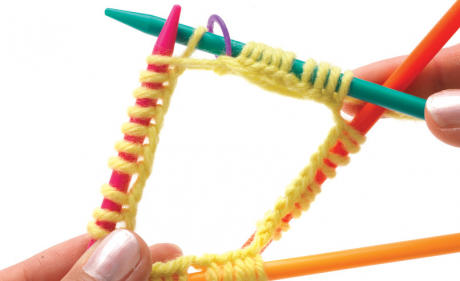 Knitting in the round
Now your stitches are in the right place, you’re ready to begin.

Step 1: Take the spare needle (blue) in your right hand and hold needle one (pink) in your left. Insert the blue needle into the first stitch and, pulling the yarn tight from the back, knit it as normal. Knit every stitch on this needle. 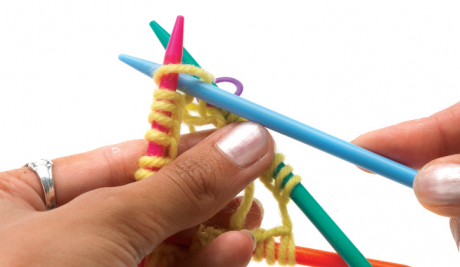 Step 2: When you reach the end of needle one, the stitches will have transferred to your blue needle. The pink one is now your spare needle and will be used to knit the stitches on needle two (yellow). Knit all the stitches on this needle. 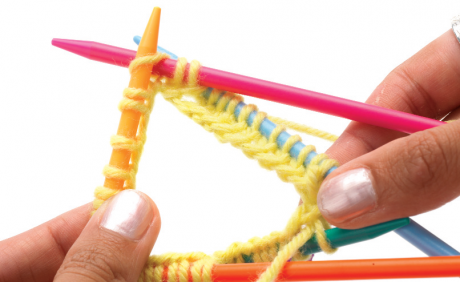 Step 3: Continue in this manner until you reach the marker, slip the marker and finish the round. As you are continuously working in the same direction, you are never turning your fabric, therefore knitting every round results in stocking stitch. To create garter stitch, knit one round then purl one round. 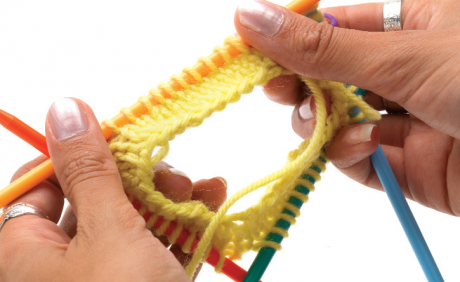 NOTE: when looked at from above, you should always be working in a clockwise direction 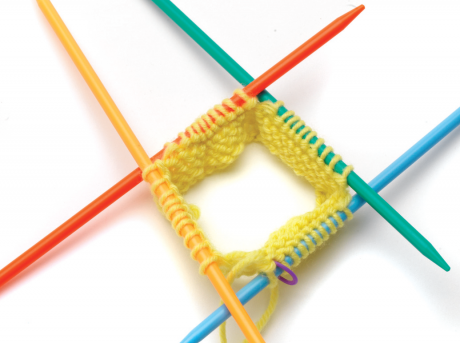 Striping out
When knitting in the round new colours are joined as normal but as you are working in a spiral, the last stitch is higher than the first, which leads to a step in the colour pattern. This is particularly noticeable in stripes. 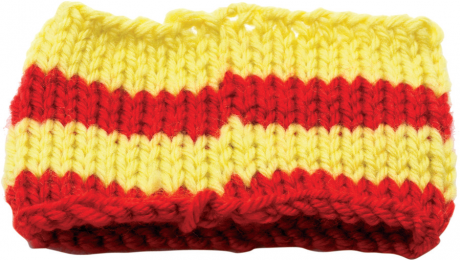 Knitting designer Meg Swansen has come up with a great way to avoid this step using a technique which she calls the Jogless Jog.

Step 1: Join in a new colour and knit to the end of the round. Still using needle four as your RH needle, lift up the loop of the first stitch of the previous round and place it on the LH needle.

Step 2: Knit this loop together with the first stitch of the new round. This is now the last stitch of the round. Pick up your spare needle and continue knitting as normal. 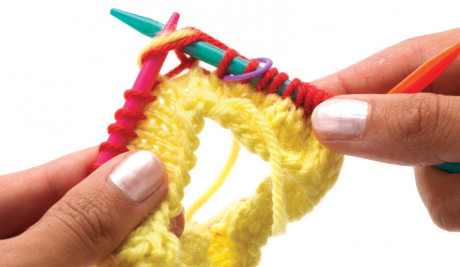 With this method the first stitch of the round is moved to the left each time which may create a slight diagonal ripple on your work. To prevent this being too noticeable, redistribute your stitches evenly after every three or four colour changes. 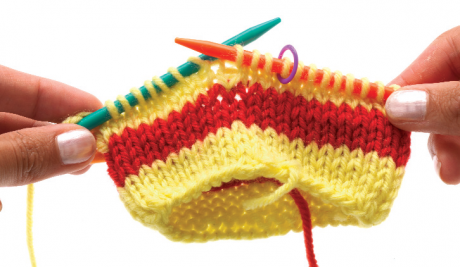 Top tips!
One of the most common difficulties encountered when knitting in the round is the creation of ladders in your work between the join in the needles. This can occur between all four needles and not just at the start of the round. To avoid this make sure you pull the yarn extra tightly between the last stitch on one needle and the first stitch on the next.

● Be careful not to drop stitches off the ends of your needle. These may be hard to spot as they will just look like a ladder in the work. Position the stitches in the middle of the needle when it’s not in use to prevent this from happening.

● When working Fair Isle in the round, join your new colours as usual but remember not to pull the yarn too tightly when stranding across the back, as you want your knitting to stretch.

● Some people find that they knit slightly tighter when working on dpns so try knitting a tension square both flat and in the round for comparison to see if this is the case with you. If you find there is a difference, you’ll know to knit your swatches in the round for all your dpn projects.