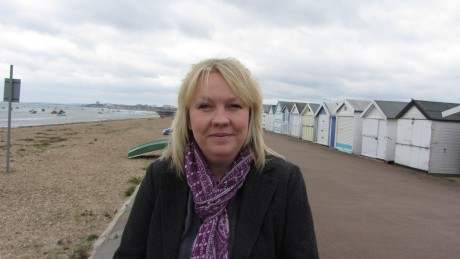 Guest post: Jane Burns, on knitting and a passion for music

This month’s guest blogger is the lovely LK designer Jane Burns, and she tells us all about her recent design, Vinyl, and the relationship with music that inspired it

“Knitting, music and stand-up comedy are my passions”

My love of music has been lifelong. My first love was Duran Duran - in fact, Debbie Abrahams and I have often discussed which of us is the biggest Duran Duran fan! It is a close run thing but Debbie’s devotion has held stronger over the years than mine. That said, I did stand in freezing cold for three hours waiting for Simon Le Bon after a gig, only to be completely star-struck and unable to move when he finally appeared for autographs. I was 25 at the time - oh the blushes! 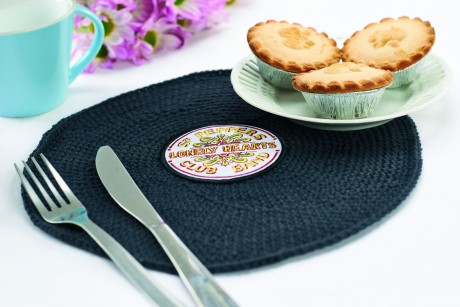 The inspiration for ‘Vinyl’ came to me when I was planning mine and my husband Doug’s wedding last year. Like most couples we wanted our wedding to reflect our personalities and passions: those special touches that say a lot about who we are and the things we love.

We both share the same love of music, but our tastes are poles apart. Doug favours heavy metal, and me indie or rock. My taste in music is eclectic: 70s rock and punk, 80s pop, 90s indie…  I only have one musical dislike and that is jazz! We sometimes use music as a weapon, and while he plays Slipknot at me, I play 80s rap, or Snow Patrol at him. I pity our neighbours!

Our wedding invitations were made from 7” vinyl records, printed with the details. We had great fun with the guests’ placemats for the wedding breakfast. We used 7” records, each chosen with the guest in mind. My sister wasn’t quite sure how to take ‘The Lion Sleeps Tonight’, but I assured her it was because it was number one when she was born. I’m not sure it would be fair to say who got, ‘Wild Thing’ or ‘Firestarter’, but you get the picture! 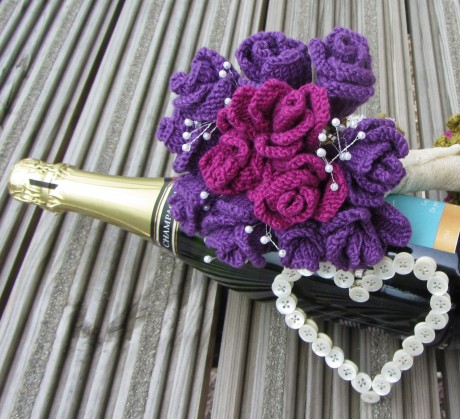 Obviously knitting had its part to play. I knew I had to get on with knitting if our big day was going to truly reflect us. So I started planning big: knitting my dress, yarn bombing the hotel rooms, the ceremony, the cars… then I scaled it down to more realistic proportions!

Being allergic to fresh flowers I thought I would make that my knitting focus. I knitted my bouquet and one for my daughter. I also made crochet and knitted buttonholes for all of the guests.

It was the use of the vinyl records as placemats that inspired Vinyl design. It is a simple crochet circle, worked in double crochet with a band patch sewn in the centre as the record label. At home I have a selection of classic albums (Wham, Blondie, Status Quo) that I use as placemats on the dining table. I scoured the charity shops for vinyl records as there was no way I could bring myself to use some from my collection!

Home is wherever I’m with you… 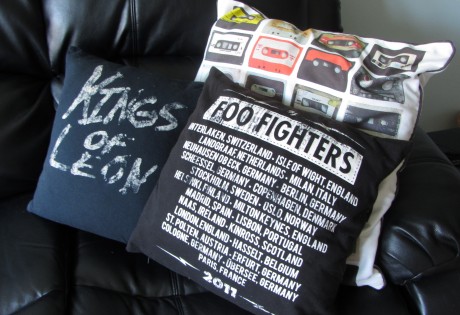 The walls of our home have album covers displayed in frames from our favourite bands along with some classic albums chosen purely for their artwork. We also have tour t-shirts wrapped around canvas frames and hung as pictures, and have even turned some tour shirts into sofa cushions!

There is something very magical about live music. Whenever possible I listen to live recordings rather than studio albums.  There is nothing better than knitting away listening to a recording of a gig you have been to, picturing yourself there in the crowd singing along. Or back at the Foo Fighters gig where Doug proposed… ahhhh, bliss.

To read more of Jane’s blog, go to www.knittingimage.wordpress.com

You can find the pattern for Jane’s ‘Vinyl’ placemats in the Let’s Knit Festive Knits book, your special gift with the Let’s Knit Christmas Special - available in stores until 17 October.