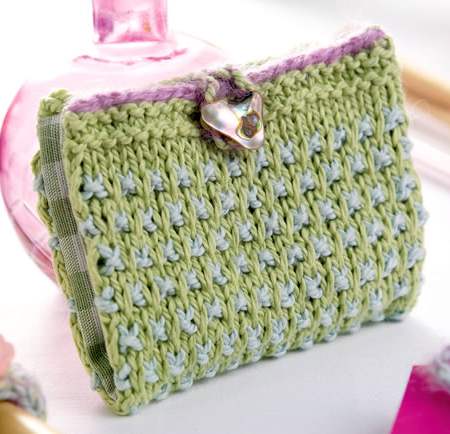 It's the time of year when knitters all over the world suddenly start casting on for last-minute projects, hoping that they'll be finished and wrapped in time for the big day – it's Christmas time! We all love the festive season and these little projects from Amanda Walker make ideal gifts for a fellow knitter – as practical as they are pretty, this is one gift that will definitely be appreciated.

Note: For the thick cord all three yarns have been held together and knitted as one

? Using 3.75mm dpns, cast on four sts
? K the four sts onto the right hand needle
? Do not turn; instead pull the stitches to the other end of the needle
? Keep repeating this process until enough knitted i-cord has been made to wrap around the needles being stored, once round for thick needles and twice around for thin needles
? Cast off, leaving a long length of yarn
? Make a twisted hanging cord. To do this, twist the two i-cords together tightly, then allow the tension of the twists to slacken, whilst holding the two i-cords together. They will twist around each other, forming a thicker, twisted cord. Stitch the ends of the cord together to form a loop, and stitch a button to the other end of the band, to fasten.

Welcome, enter your email to get your free pattern download!

Register for free to the Let's Knit newsletter to receive all our member benefits.

Great, you're almost there!

You should receive a comfirmation email shortly to:

We have sent you a confirmation email, please confirm it.