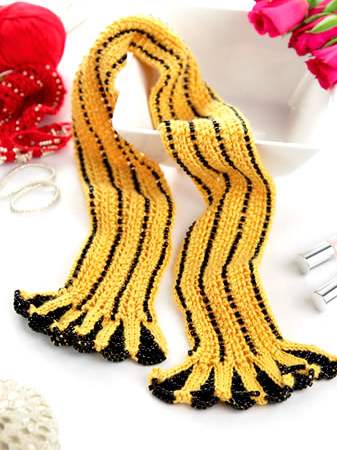 Introduce yourself to beading with this stylish skinny scarf

Beaded projects are beautiful to look at and fun to work with – though they may seem scary at first, the end result is well worth any initial hiccups. This skinny scarf from Karen Cragg would make a perfect first beading project – it's easy to memorise and being a scarf, it can be made as long or short as you want - and in any colour.

TO FINISH SCARF: repeat Beaded Frill, but reverse beading - start with one bead on each rep and work up to six beads per rep, ending on a p row
? Cut yarn, leaving enough to work the last row, and ensuring that the correct amount of beads needed are still on the yarn
? Cast off first two sts, bring the yarn and beads through the third st and fasten off. Move the six beads into position and then cast off the next three sts in the same way. Rep to end of the beaded frill row

The most important thing to remember when working with beads is to ensure that you have the correct amount threaded onto your yarn before you start – if not, the yarn will have to be cut further down the project to insert more beads (and knots poking through your work is so not a good look!). Follow the guide below to get started…

1. Before starting to knit, thread beads onto yarn. To do this, thread a fine sewing or beading needle (one that will easily pass through the beads) with sewing thread. Knot the ends together to form a loop and pass the yarn through it. Thread a bead onto the sewing thread and then gently slide it along and onto the yarn.

2. Continue in this way until required number of beads are on yarn. Do not place beads on edge sts of rows as this will interfere with seaming.

Bead 1: bring a bead to the front with yarn forward, as if to purl. Slip next st purlwise, and take yarn to the back, leaving bead at the front of the work

Thumb method
When casting on stitches for the frill, it may seem tricky to cast on a new stitch after placing the beads. The way to do it is rather like the thumb method and only one needle is used. Transfer the needle with the stitches on it into your right hand, loop the ball end of yarn clockwise around your left thumb, insert the point of the needle through the loop from below and wrap the ball end of yarn anti-clockwise around the needle tip. Pass the loop from your thumb over the top of the needle and pull the yarn to tighten the stitch. You can now cast on the next stitch using two needles in the normal way.