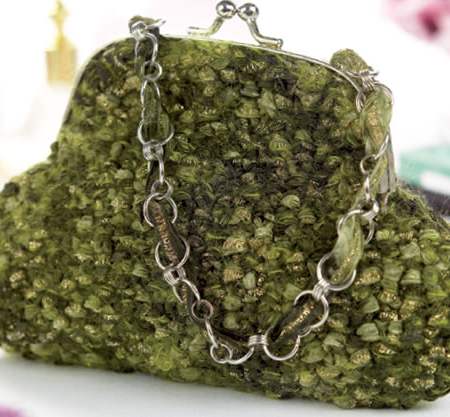 If you’ve blown your budget on the outfit and have nothing to carry taxi fare and lip stick, don’t panic! Amanda Walker is here to show you how to make your own evening bag! She combines a strand of Rowan’s fuzzy Kidsilk Haze with one of Louisa Harding’s shimmering Sari Ribbon yarn in a simple moss stitch for a dense, textured fabric. The purchased metal frame gives Holly a professional finish. It’s the perfect accessory for a romantic winter soiree!

With right sides facing, yarn B and back stitch, sew the two sides of the bag together, beg at the two cast off stitches, around the curve, along the base, up around the opposite curve to the other two cast off stitches. Using yarn B, sew the top of the bag to the two sides of the metal frame with running stitch, first in one direction, then in reverse for optimum security. Finally, weave a length of yarn A through the chain and attach the chain to the frame.

Break the rules
For this project, Amanda has used needles much smaller than the 8mm ones suggested for use with the Sari Ribbon (and even added in a second yarn!). This, combined with moss stitch, has created a dense fabric that will hold its shape when the purse is used. It has even removed the need for lining! Why not experiment with your free 5mm needles on yarns that are not usually knitted up on this size and see what effects you can create?