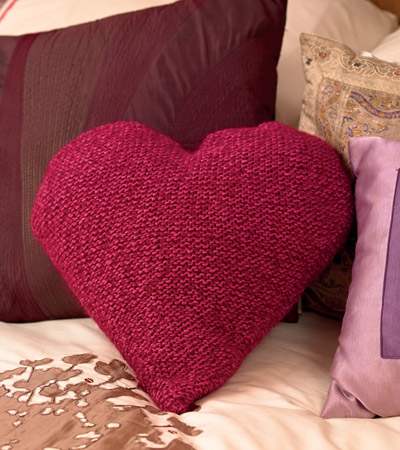 Feel the love with Sarah Hazell's heartfelt knit for the home

Heart-shaped homewares aren't just for Valentine's day but we thought this issue was the perfect opportunity to present Sarah Hazell's fabulous cushion. The sheen of the silk blend yarn adds an extra touch of glam and it's actually quite easy to knit. The construction is a little unusual though so read the Knit wise panel before you begin.

NOTE: worked from top down. Beg with peaks of heart then join tog before making main piece

Weave in any loose ends. Place RS of work together and join with backstitch, leaving an opening at one side for cushion pad or stuffing. Close gap with backstitch.

How this project is worked
Aphrodite is made in two pieces but while many hearts are worked from the bottom up, this one is worked from the top down, starting at the two peaks. Work the first peak, then slide all the stitches to the far end of your LH needle and cast on for the second peak. Knit this, ending with all the sts on the same needle, then work across both sets of stitches before continuing down to the point.