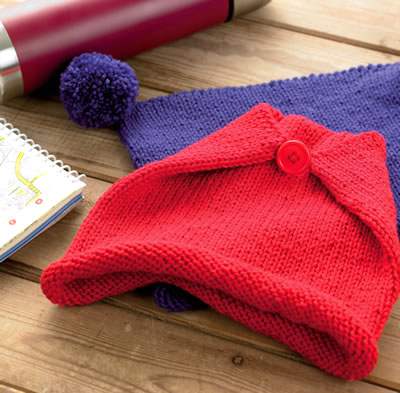 ? Cast on 80 stitches
? Work in rounds of stocking stitch (k every stitch) until work measures 26cm long.
? Cast off
? Make up as for Ruby (below) but without the addition of the button

? Cast on 80 stitches
? Work in rounds of stocking stitch (k every stitch) until work measures 26 cm long
? Cast off

Fold the work in half. Stitch both sides of the cast-off edge together, to form a square hat. Fold the two top corners inwards towards each other and, using the tapestry needle and the same yarn as you used to knit the hat, sew them together. Finally, add a decorative button at the point where the corners meet.

To finish off Bob, add a bobble to each corner! Here’s how:

2 Using sharp scissors, cut around the edge of the circle, between the two cardboard discs. Cut a 60cm length of yarn. Fold it in half so that it measures 30cm, and tie it around the yarn between the discs, pulling tightly and knotting firmly. Once secure, remove the card discs, fluff out the fibres and trim any stray ends.

Straight forward
Stocking stitch is achieved on straight needles from an alternating pattern of knit and purl rows. Using a circular needle means the work is turned for you and stocking stitch magically appears, even though you are using only knit stitch!